Buy my new book: From Amazon for $26
It's about my path from high school space-race buff in Madison to a UW PhD in Meteorology, the National Center for Atmospheric Research in Boulder Colorado, le Laboratoire de Météorologie Dynamique in Paris France and my 30 year career at the NASA Goddard Space Flight Center in Maryland just outside Washington DC.
NASA was a great gig, doing research using our newest weather satellites and developing the latest image processing & display systems using  state-of-the-art computer technology. I used those images, movies and technology to give my NASA Earth Science Electronic Theater presentations to audiences small and large in the Lower 48, Alaska, Hawaii and around the world.
The book evolved from the stories told in my E-Theater presentations. The title refers to the Apollo 17  Blue Marble and the Blue Marbles we made at NASA Goddard of the Western Hemisphere that we made in response. As guideposts to the journey, I follow the lives of myself, my dad, and my mentor and inventor of the first camera to make movies from space, UW Professor Verner E. Suomi.
The book title is:
The Human Journey to the Blue Marble and Beyond
A Photographic History of Looking at Earth and Weather from Space from the Dawn of the Space Age to the Present Day
1946 - 2019
by Arthur Frederick Hasler 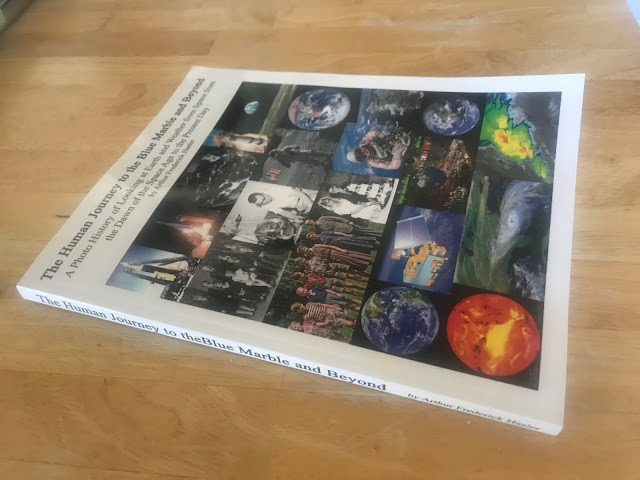 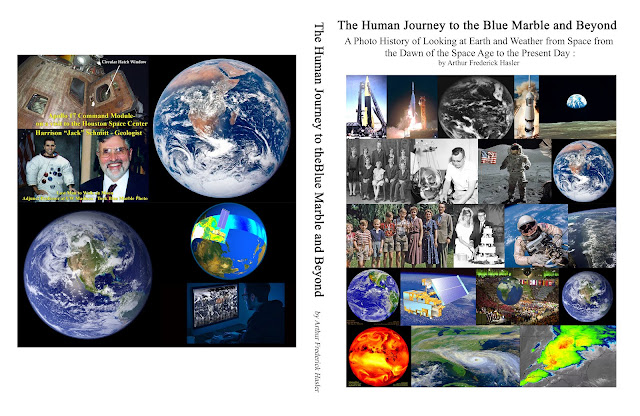 See the new blog to access
Movies for my Book:

The Human Journey to the Blue Marble and Beyond: Movies


! Buy the New Book !
The Way Home:
A Photo Biography of the Professional Career of Arthur Davis Hasler
202 Pages, large 8.5” x 11” format, 252 photographs 147 in color
by his son Arthur Frederick Hasler
at the link:

from the createspace store for $14.95

See a digital preview of the soft cover book at

The Human Journey to the Blue Marble and Beyond: Movies


Movies from:
The Human Journey to the Blue Marble
and Beyond


If you touch the links they should take you directly to the movies. Be sure to watch them full screen for best effect. 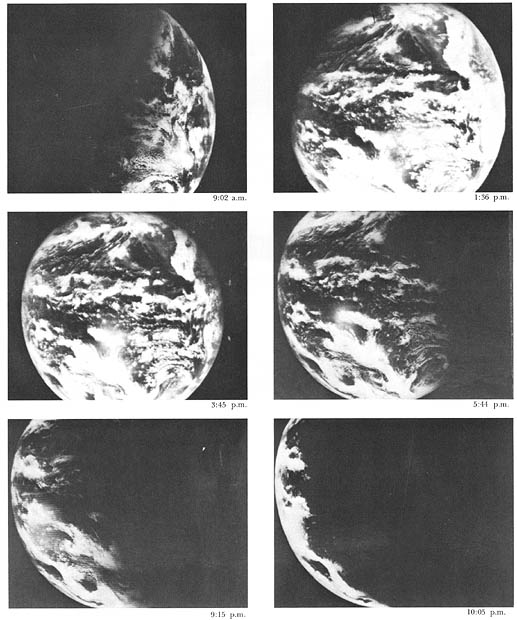 You can watch examples of the movies that I made with help from Suomi and Jack Cornfield at  https://www.youtube.com/watch?v=Rj4AecJzcf0 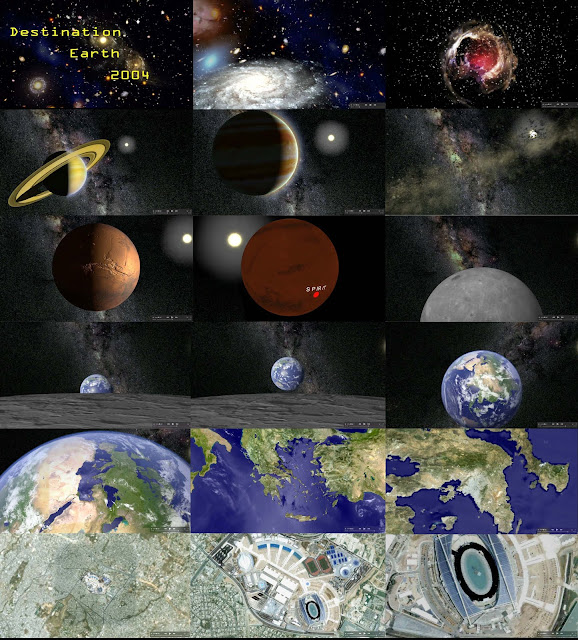 To view the Destination Earth 2004 Visualization, DE2004,on the Web go to Drop Box at:

or with sound on YouTube:https://youtu.be/_EWBnsxkAC4

The movie was funded directly by NASA Headquarters Associate Administrator for Earth Sciences, Ghassem Asrar and the movie was made by Marit-Jentoft Nilsen and Jesse Allen at Goddard.

The following are seen on the opposing page in Fig. 19:
1) Originating in the Hubble Deep Space Field

3) Passing through a Super Nova Explosion (observed by Hubble)

4) Passing through the Cassini Rings of Saturn as observed by Hubble (Note: The Sun is
increasing in size and the Milky Way is now seen in the background

5) Grazing the giant gas planet Jupiter as observed by Hubble

6) Passing through a simulated asteroid belt

7) Circling the red planet Mars with the locations of the Martian rovers Spirit and Opportunity marked as white dots. (The Curiosity Rover had not reached Mars at this time)

10) Approaching the Earth as we see parts of Africa, Asia and Europe (as observed by Terra)

11) Approaching North Africa, Southern Europe and the Mediterranean Sea (as observed by Terra)

12) Approaching Greece (as observed by Terra)

14) Zooming in on the Olympic campus and the Olympic stadium, site of the opening and closing ceremonies (as observed by Spot)

You can see some examples of our ATS-3 movies at: 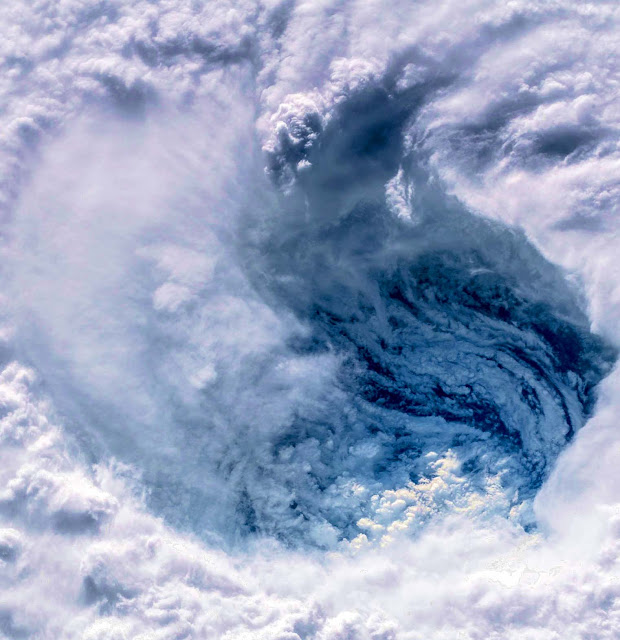 You can see it on the web from the drop box link: 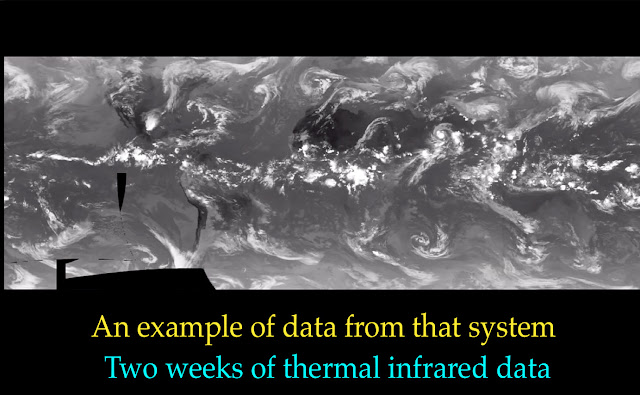 The first frame of a two-week sequence of 11µm infrared images from five geosynchronous images stitched together into a global polar stereographic projection is shown in Fig. 68.

You can view the sequence in an animation from Dropbox at:

1 1)    Cold things are white and warm things are black. Clouds are cold and appear white. Deserts heated by the sun are warm and appear black. As the Earth turns, the world’s desert regions are heated by the sun. The Australian deserts, the African deserts and the Western Hemispheric deserts (Western US and Andes Mountain deserts) sequentially heat up and turn black.

2 2)    You can see the extratropical cyclones turning to the left (counter clockwise) in the Northern Hemisphere and to the right (clockwise) in the southern Hemisphere. Since this is a two-week sequence you can watch how a particular cyclone moves from West to East and morphs into radically different shapes. Weather forecasting is basically the forecasting of that easterly speed of transport and the morphing of the cyclones over periods up to 10 days. Even with the best initial conditions (data), knowledge of the physics and the biggest computers in the world it is not an easy task.

3 3)    All along the Equator we see the “popcorn” cumulous of the Inter-Tropical Convergence Zone (ITCZ). If you have seen the movie Cast Away starring Tom Hanks, his airplane is forced down by deep convection (a severe thunderstorm) in the ITCZ.

4 4)    You can also see a tropical cyclone approaching Karachi Pakistan in the Arabian Sea. We would call a storm like this a hurricane if it were approaching the US.

5 5)    If you look carefully you can see a light area of dust coming off the West Coast of Africa from the Sahara Desert over the Atlantic Ocean towards the end of the sequence.

The SeaWiFS Ocean Color Instrument has 8 visible to near-infrared wavelength sensors from 402 to 880 nm chosen primarily to detect chlorophyll. In the image on the previous page, areas of high productivity are green, and red. Low productivity areas are yellow and brown. A striking feature is the green band in the middle of the Pacific Ocean. In an El Niño year there is strong upwelling of cold-water rich in nutrients. This forms the basis of a rich food chain that starts with tiny Phyto plankton, and proceeds to small krill, and continues to normal sized fish and on to the large tuna, sharks, and even giant whale sharks and whales. You can also see the rich high latitude ocean areas like the Gulf of Alaska that draw whale migration. Overly rich eutrophic dead zones like the one off the Mississippi Delta appear as red.

To see an animation of the data in Fig. 95 press the link below 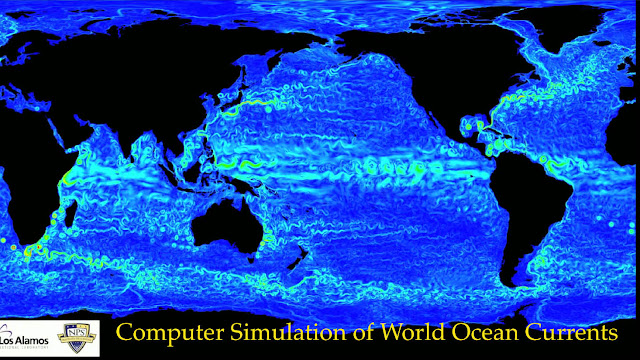 In the next image, we see a Los Alamos Labs global ocean current simulation that does not come from space born observations. However, it gives another window on what is going on in the planet’s oceans. Higher speed currents are lighter green, yellow and red.

You can see the animation at:


Some of the outstanding and fascinating features of the currents are as follows:

1) The Gulf Stream starting south of the Yucatan Peninsula and Cuba, shooting the gap between Cuba and Yucatan forming the loop current in the Gulf of Mexico, shooting the gap between Cuba and Florida and continuing up the East Coast of the US and finally as giant eddies across the Atlantic to Europe. Ships take advantage of the fast 4 mile/hour current to speed travel up the East Coast, but the most important effect of the warm Gulf Stream is the moderation (warming) of the climate of Europe. Europe is at such a high latitude that it would be much colder without the Gulf Stream.

2) The complimentary Agulhas Current starting North of Madagascar, passing though the gap between West Africa and Madagascar, continuing down the West Coast of Africa and splitting off across the Southern Indian Ocean and the roaring forties south of Australia and around the whole planet.

3) The Labrador Current going from North to South, passing between Greenland and the Canadian Maritime Provinces. The Labrador Current transported the infamous iceberg from the Arctic into the North Atlantic where it was struck by the Titanic Ocean Liner in April of 1912.

4) The Indonesian Throughflow manifests itself as numerous high-speed currents shooting the gaps between islands of the Indonesian Archipelago. It is an ocean current with importance for global climate since it provides a low-latitude pathway for warm, fresh water to move from the Pacific to the Indian Ocean and this serves as the upper branch of the global heat conveyor belt. (Wikipedia). The source of this current also has a Northern branch which serves to moderate the climate of Japan.

In this animation, the colors represent ocean temperature with blue being cold and red hot. Again, we have the warm Gulf Stream starting south of the Yucatan Peninsula and Cuba, shooting the gap between the Cuba and Yucatan forming the loop current in the Gulf of Mexico, shooting the gap between Cuba and Florida and continuing up the East Coast of the US. The point here is that if the loop current were to have extended further North into the Gulf or if the oil spill shown in Fig. 93 had drifted further South, the Gulf stream would have carried the oil between Florida and Cuba and polluted beaches far up the East Coast of the US.

You can see the animation at the link: https://youtu.be/y1X305ebj6Q 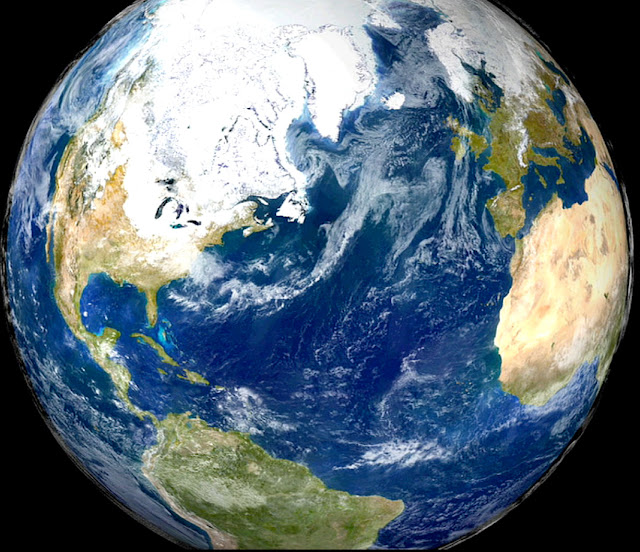 The zoom can be seen at the link:

2017: GOES 16 Ushers in a new Era in Geosynchronous Weather Satellites

Note The following Figures are single frames from animations.

Examples of GOES 16 animations can be found on the web at: https://www.goes-r.gov/multimedia/dataAndImageryVideos.html 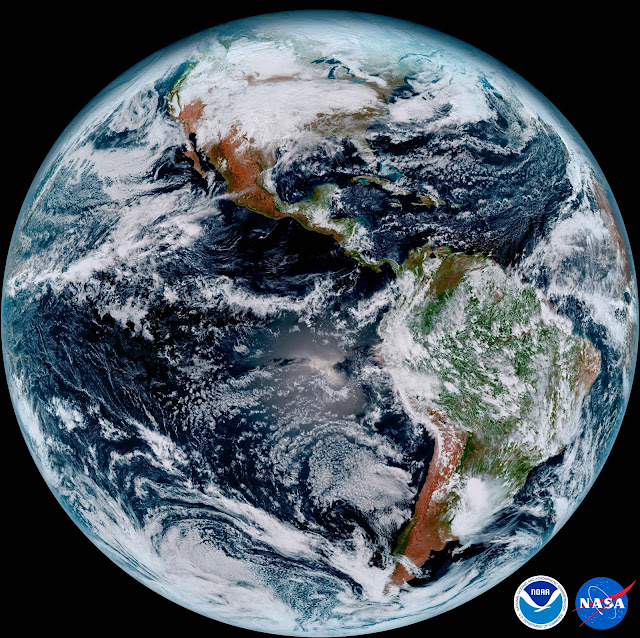 You  can view this animation from Drop Box at at the link:
https://www.dropbox.com/s/zw61vevdigziume/ABI_Jan15_2017_fulldisk_loop.mp4?dl=0 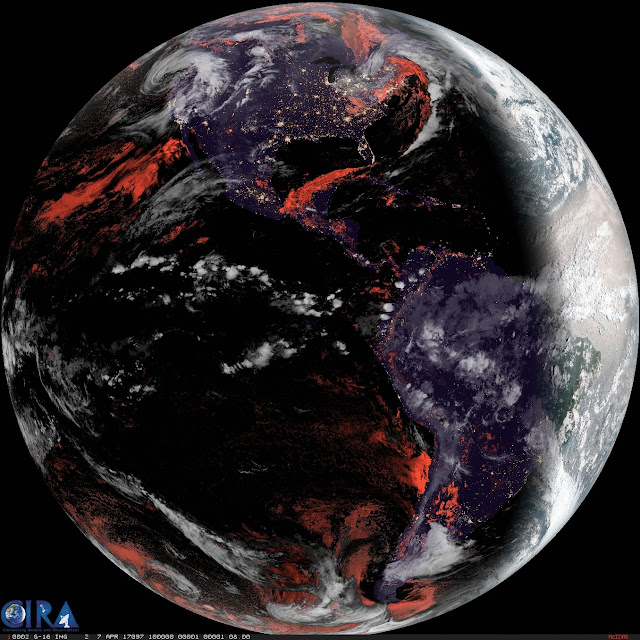 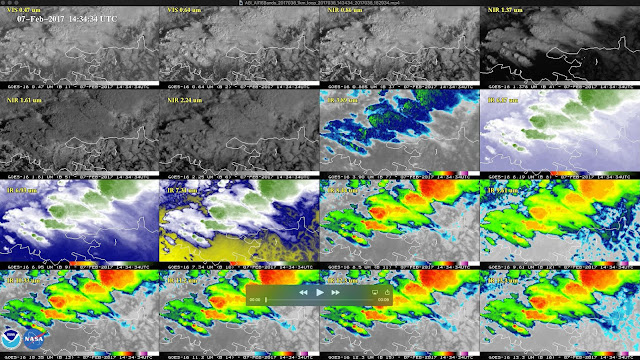 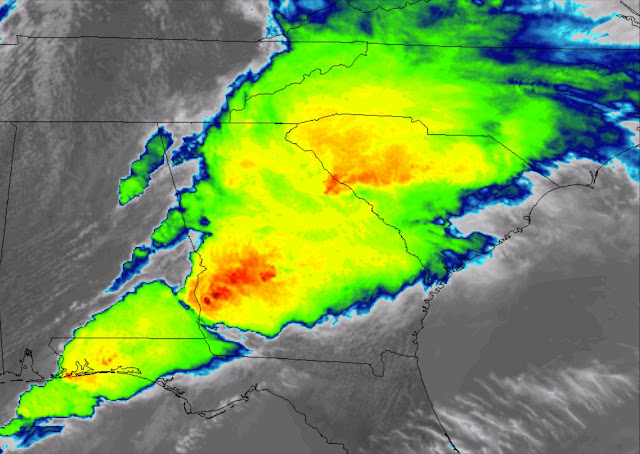 You  can view this animation from Drop Box at at the link:
https://www.dropbox.com/s/fyf10mxblt1o2im/GOES-16-SoutheastStorms4.5.17.mp4?dl=0 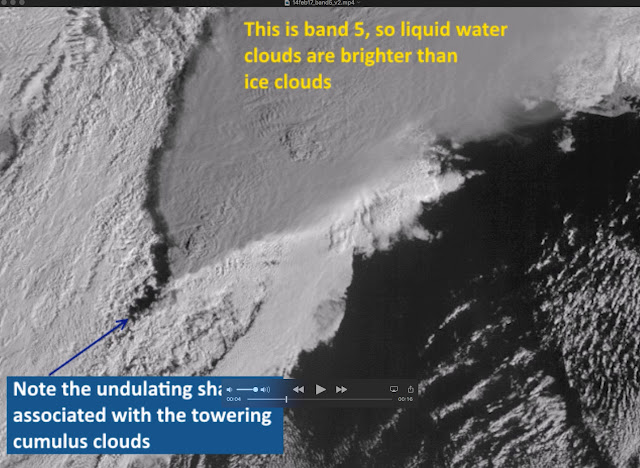 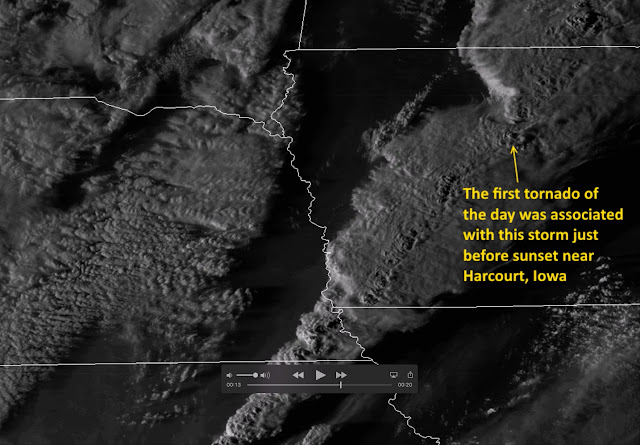 You  can view this animation from Drop Box at at the link:
https://www.dropbox.com/s/4yn8gthj4nscb4o/6mar17_band2_loop_annotated.mp4?dl=0 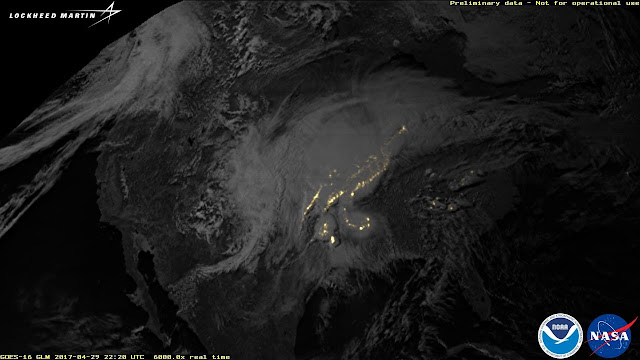 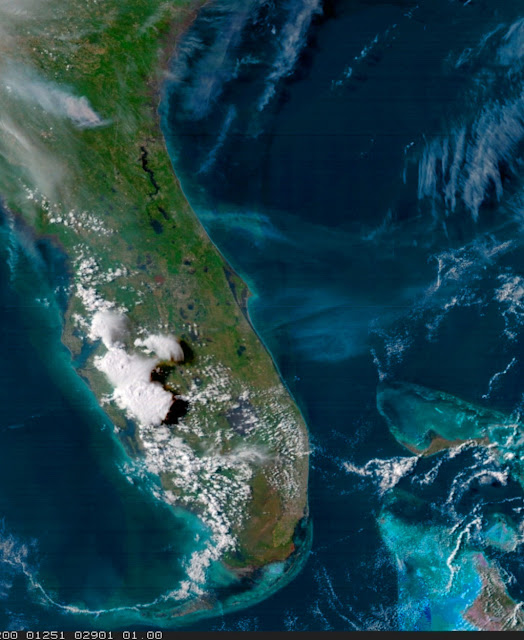 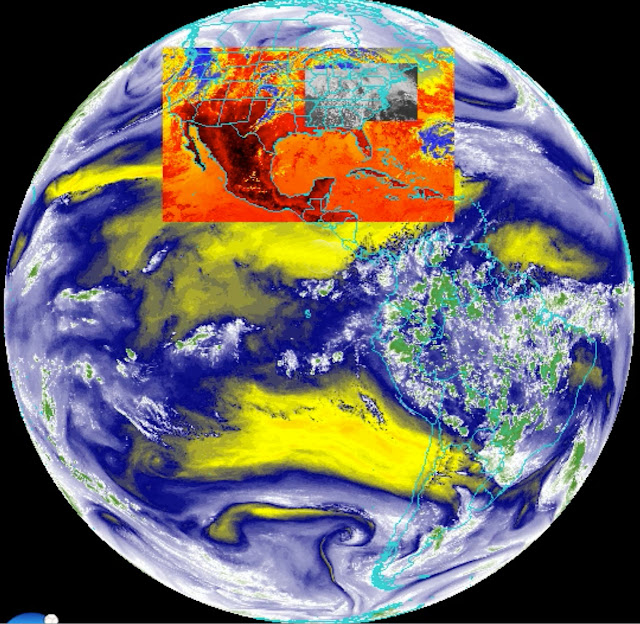 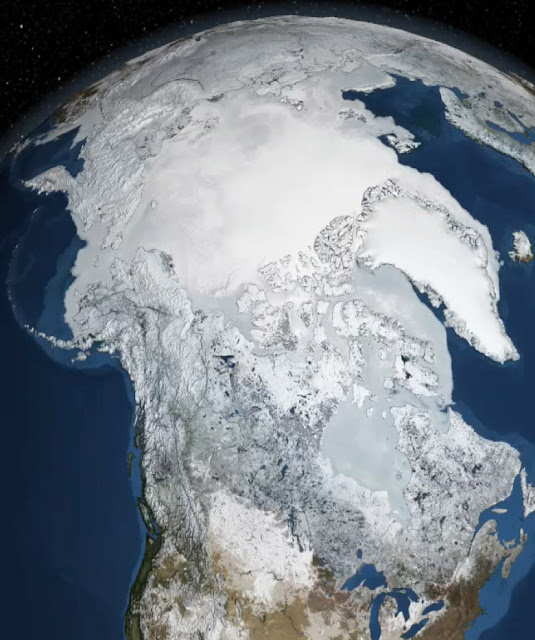 Take a look an animation of the melting Arctic Sea Ice (North Pole) from space: January to September 2007: